Arriving from the East to Tindari, the succession of sloping hills that flow into the sea forming Tindari looks like a great dragon with sleeping peacefully, lying on the head, the sanctuary, visible from miles away. The train glides along the "spine" of enjoying fine views over the Gulf of Patti, and on the beaches until Capo Milazzo. The sanctuary, built recently, hosting a black Virgin and Byzantine pilgrimage especially in May, the month of Mary, and September 18. A peak in the sanctuary (visible from the terrace) you can see the lakes of Marinello, small pools of water that creates creeping into the sea and sandy bay, each different time. The birth of these lakes is linked to the legend of a girl falling from the head due to the miscreant mother (the woman did not want to "trust" to a black Virgin) and miraculously saved by the sudden retreat of the raging waters to make way to accept it and cushion the fall, a layer of soft sand. In 1982 one of the ponds took on a shape similar to a veiled woman in profile in which people perceive, Our Lady of the sanctuary. The lakes are within walking distance from the beaches of Oliveri.

Located in a beautiful position, on top of the head of the same name, the Greek colony was founded Tyndaris by the tyrant Dionysius the Elder of Syracuse in 396 BC Spartans for refugees at the end of the Peloponnesian War (404 BC). The name, perhaps pre-existing, goes back to the Dioscuri, also called Tindaridi, and their earthly father Tyndareus, the legendary hero and king of Sparta, husband of Leda and father also Elena, indirect cause, the legend goes, the war Troy, as told by Homer in the Iliad, the link between the city and the twins (the divine father is Zeus) is witnessed by the presence of depictions on coins and mosaics.

Dominant and defensible, the new city is a strategic point in the control of the stretch of sea between the Aeolian Islands and Messina. The imposing walls built from the ground and unfortunately serves to prevent the fall in the hands of Carthaginian. Subsequently passed under Roman rule, the city entered a period of great prosperity during which they are constructed or modified many public buildings: schools, markets, spas and theater, of Greek origin, but modified to suit the needs of new audiences .
Tindari should however experience a period of decline that is the salient points in a landslide that plunges the city and the Muslim conquest of the ninth century. D.C.

The Walls. Along the slope that leads to the top of Tindari, sometimes we go round the imposing walls built at the time of Dionysius and later reinforced and replaced by a double facing of blocks of hewn stone. The wall enclosing the points not only defended the city, of course, he had a regular plan, with three large decumani (the main streets and parallel) and perpendicular hinges. The conformation of the ground, uphill, facilitated the sewer system that ran along these roads, slopes, a small Antiquarium, over the entrance to the excavations on the left, displays relics unearthed during the excavations.

The Roman insula. This is a whole district south of the Upper Decumano, complete with spas, tabernae, housing and in particular of a great patrician house that still, in the floors of some rooms, the remains of mosaics.

The archaeological zone. The Basilica.E 'a beautiful arched remains of which give an idea of the original size. Although the name designates the site for the meetings, its true function remains uncertain: perhaps a monumental propylon agora, the city's main square.Constructed of large square blocks of sandstone, appeared on the front, five arches. The central, larger, was the entrance to a passage covered with barrel vaults which served as a gallery on the main road.

The Theatre. Reached Decumano Upper left corner. It is located upstream of Decumano Superior, probably the main street (come to light only two decumani). Of Greek origin (late fourth century BC.) Was constructed using the natural shape of the land with the auditorium facing the sea and the Aeolian Islands. Was transformed into the imperial era to host gladiatorial combat. 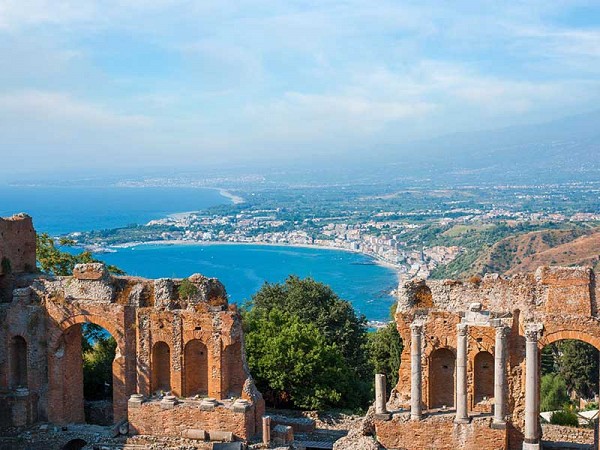